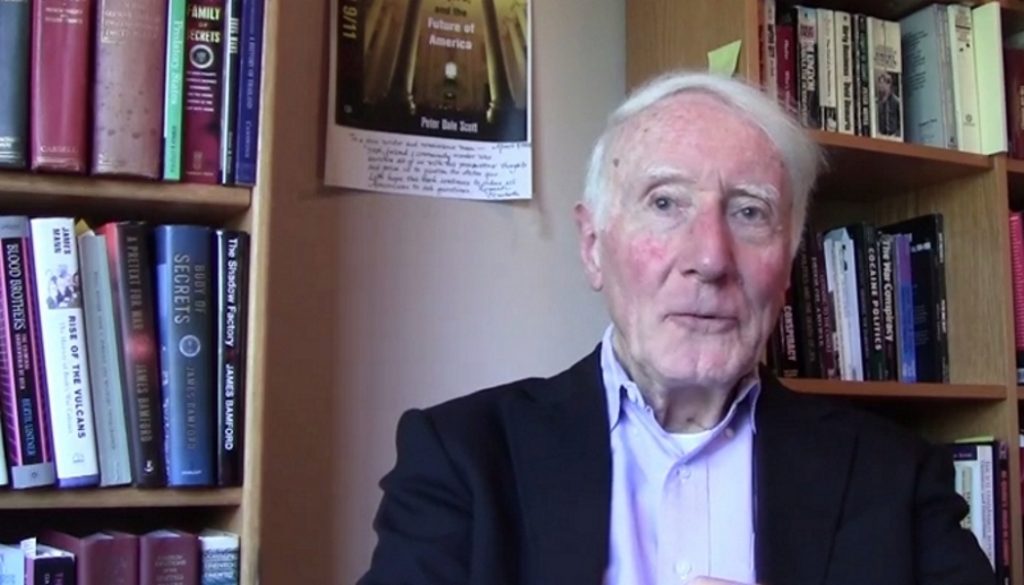 Peter Dale Scott is a Canadian-born poet, former diplomat, and former English professor at the University of California, Berkeley.

A son of the Canadian poet and constitutional lawyer F. R. Scott and painter Marian Dale Scott, he has been critical of American foreign policy since the era of the Vietnam War. Scott was a signatory in 1968 of the “Writers and Editors War Tax Protest” pledge, in which participants vowed to refuse tax payments in protest against the Vietnam War. He spent four years (1957–1961) with the Canadian diplomatic service. He retired from the UC Berkeley faculty in 1994.

Scott has written about the role of the “deep state” (as opposed to the “public state”). Rejecting the label of “conspiracy theory”, he has used the phrase “deep politics” to describe his political concerns.

His book, The Road to 9/11 (2007), deals with geopolitical context of events leading to 9/11, and argues “how U.S. foreign policy since the 1960s has led to partial or total cover-ups of past domestic criminal acts, including, perhaps, the catastrophe of 9/11.” His books The Road to 9/11 and American War Machine was reviewed by Bernard Norlain, a retired French five-star General of the Air Force. In all, his books have been translated into French, German, Italian, Spanish, Russian, and Bahasa Indonesia. His articles have been translated into 16 languages, including Turkish, Arabic, Persian, Chinese, and Japanese.

Of Scott’s book, American War Machine: Deep Politics, the CIA Global Drug Connection, and the Road to Afghanistan (2010), Daniel Ellsberg commented: “I said of Scott’s last brilliant take on this subject, Drugs, Oil and War, that ‘It makes most academic and journalistic explanations of our past and current interventions read like government propaganda written for children.’