Bolsonaro Meets with Putin to Express Solidarity with Russia 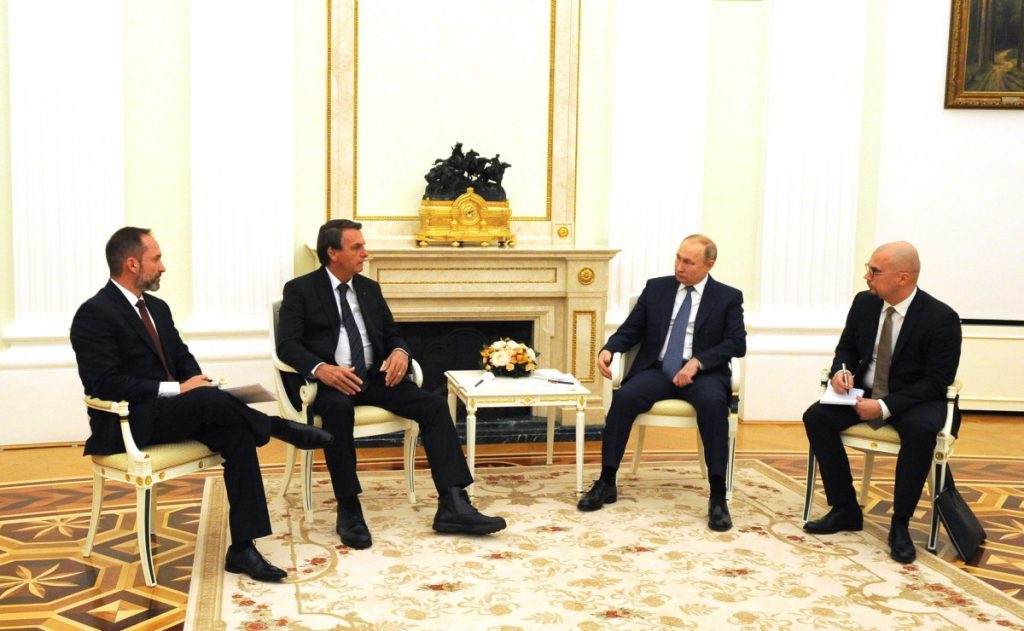 On February 16, 2022 Brazilian President Jair Bolsonaro made a high profile visit to Moscow where he declared that Brazil stood in “solidarity” with Russia. “We are in solidarity with Russia,” Bolsonaro said to Putin. “We very much want to collaborate in many areas — defense, oil and gas, agriculture. The meetings are happening.”

Bolsonaro’s move has sparked wide speculation about Brazil drifting outside of the United States’ orbit during a time when the security situation between Russia and Ukraine is rapidly deteriorating.

Bolsonaro, who was elected in 2018, initially took a more pro-US line when former President Donald Trump was in office. After all, both leaders share right-wing populist tendencies and faced similar opposition forces in both the media and bureaucracy. At the time, there were even rumors of Brazil potentially joining the North Atlantic Treaty Organization (NATO) — a move that aligned with the Trump administration’s hawkish objective of carrying out regime change in neighboring Venezuela.

However, relations between the US and Brazil have grown fraught since Joe Biden assumed the presidency. Bolsonaro was vocal about election irregularities taking place during the 2020 elections and was one of the last foreign leaders to recognize Biden as president. As Terrence McCoy of the Washington Post observed, Biden and Bolsonaro have yet to speak with each other.

The chilliness between Brazil and the US will likely continue in light of recent statements by the Biden administration in which it criticized Bolsonaro’s recent visit with Putin.

“I think Brazil may be on the other side of where the global community stands,” White House press secretary Jen Psaki declared on February 18. The State Department doubled down on the criticism against Brazil

“The timing of the president of Brazil expressing solidarity with Russia, just as Russian forces are preparing to launch attacks on Ukrainian cities, could not be worse,” a State Department spokesperson remarked.

Reuters saw text of a State Department statement which read, “It undermines international diplomacy directed at averting a strategic and humanitarian disaster, as well as Brazil’s own calls for a peaceful resolution to the crisis.”

Brazil’s diplomatic gesture towards Russia demonstrates its willingness to court countries that are US rivals. In some of the DC Blob’s estimations, Bolsonaro’s behavior could be viewed as erratic. However, from a realpolitik standpoint, it’s in fact quite reasonable.

Bolsonaro is just the latest in the new generation of executives who recognize that the new geopolitical landscape requires for leaders to become more flexible in balancing their international relations. As the US grows more unstable, both domestically and internationally, various countries will become more hesitant in fully aligning with it. Brazil could be among the most prominent of this bunch due to its traditionally independent foreign policy and economic agenda that doesn’t sit well with Washington’s zealous climate change policy objectives.

In turn, some countries may perhaps align with emerging great powers such as China and Russia or form parallel alliance networks and regional economic structures as ways to wean themselves off American influence. The new environment of multipolarity requires flexibility, which is a major annoyance for universalists in DC who want the entire globe to bend knee before Uncle Sam.