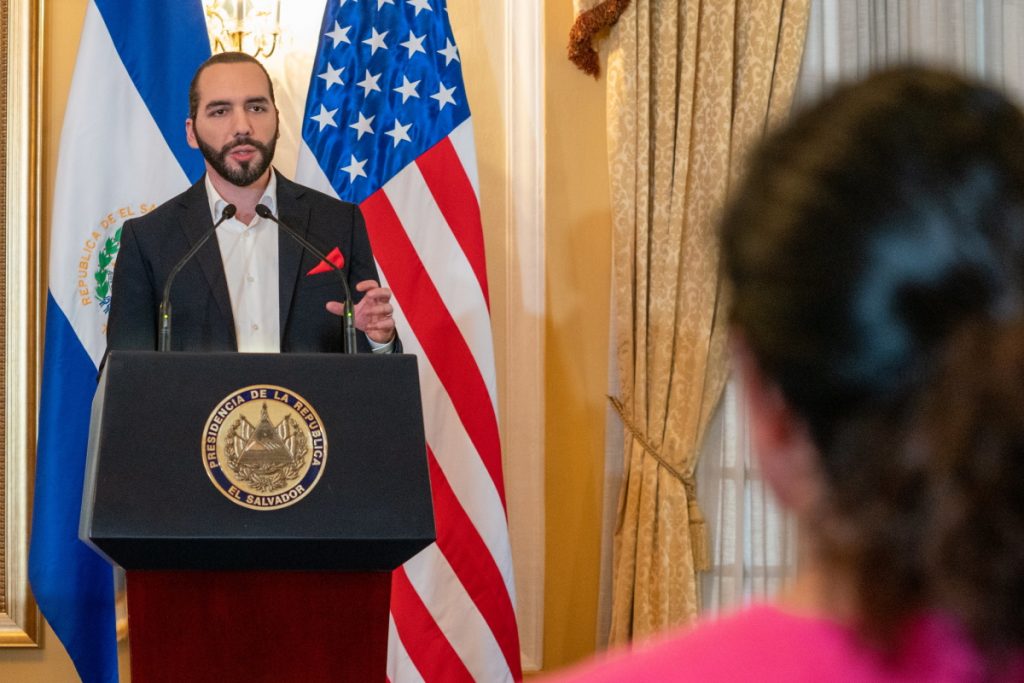 First elected in 2019, Bukele is an intriguing figure. And that’s putting it lightly. In 2020, Bukele stoked controversy by sending military troops into the Salvadoran parliament as part of strong arm maneuver to ostensibly demand $109 million in security funds to combat gangs.

On foreign policy, Bukele started out as a seemingly loyal strategic partner of the United States. For example, in 2019, the millennial president’s administration expelled Venezuelan diplomats in protest of the highly contested 2019 Venezuelan election, in which many Western countries and their allies viewed the government of Nicolás Maduro as illegitimate.

Curiously, Bukele was critical of countries like China back in 2019, when he accused it of not playing by international rules and intervening in other countries’ affairs. However, he changed his tune on China towards the end of 2019 when he signed on to a significant infrastructure deal with the East Asian giant.

For COVID-19 policies, Bukele’s record seems to be all over the place.  When the COVID-19 pandemic first broke out worldwide, Bukele implemented harsh policies such as a national quarantine, a three week closure of schools, and a prohibition on gatherings of over 500 people. On top of that, his government banned foreigners from entering the country and enacted a 30-day quarantine on Salvadorans entering from foreign countries.

At first, Bukele looked like another Latin American leader who slavishly followed the guidelines of globalist institutions.

However, in 2021, Bukele pulled a 180. The millennial leader set the world ablaze when he gave a speech at the Bitcoin 2021 Conference in Miami last June. At the conference he announced his plan to make Bitcoin legal tender in El Salvador. Then, in September, he signed a law that established Bitcoin as legal tender.

Since then, Bukele has made it clear that there are no vaccine mandates or passports in El Salvador, no mask mandates, nor are there testing requirements for foreigners and Salvadorans to enter the country.

In addition, his move to open the country to Bitcoin has provoked negative responses from globalist institutions like the International Monetary Fund. The IMF argued that El Salvador’s decision to adopt Bitcoin as a legal tender is a risky move.

You have 0 jurisdiction on a sovereign and independent nation.

We are not your colony, your back yard or your front yard.

Stay out of our internal affairs.

Don’t try to control something you can’t control 😉.”

As of late, Bukele appears to be embracing market-based reforms such as cutting red tape, downsizing the country’s bureaucracy, and encouraging foreign investment in the country, among others. In a tweet he posted on February 20, 2022, he announced that “I’m sending 52 legal reforms to congress, to remove red tape, reduce bureaucracy, create tax incentives, citizenship in exchange for investments, new securities laws, stability contracts, etc. The plan is simple: as the world falls into tyranny, we’ll create a haven for freedom.”

Overall, it looks like Bukele wants to make El Salvador a safe space for people who prioritize economic freedom.

While Russia has apparently invaded Ukraine, a regional geopolitical affair that could have been avoided had NATO expansion been halted, Bukele argued that the “real war” on Western freedoms is being waged by governments in the West — from France all the way to Canada. The Salvadoran president believes that the current hysteria directed towards Russia is a clever way to shift attention away from Western government’s controversial COVID-19 policies.

Time will tell if Bukele ends up becoming the real deal and a genuine political force against globalism.

Politics is known for its many disappointments, but it’s always good to see a politician shake things up. Hopefully, Bukele keeps his contrarian streak and does not become just another establishment politician with anti-establishment cosmetics. The world needs a new generation of leaders to resist the present globalist order.

Share. Twitter Telegram LinkedIn Facebook Email
Previous ArticleDavid McHutchon: An Independent Scotland Should Be Out of the UK, EU, & NATO
Next Article Cynthia Chung: The Esoteric & Eugenicist Roots of the Great Reset