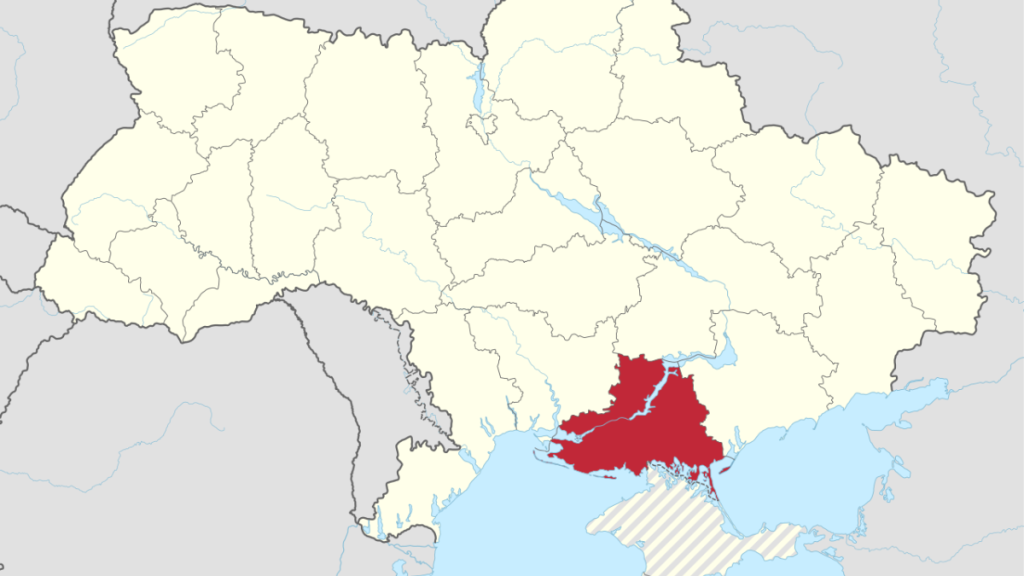 Image: By TUBS - This vector image includes elements that have been taken or adapted from this file:, CC BY-SA 3.0, https://commons.wikimedia.org/w/index.php?curid=31828256
Share
Twitter Telegram LinkedIn Facebook Email

Moscow-backed authorities in Ukraine’s Kherson and Zaporizhzhia oblasts are reportedly preparing to hold a referendum on joining Russia. But given that the Kremlin still has not incorporated the self-proclaimed Donbass republics into the Russian Federation, it remains highly uncertain if the two southern Ukraine’s regions will become part of Russia any time soon, if at all.

From the perspective of the self-proclaimed Donetsk People’s Republic and Lugansk People’s Republic, a potential Russian annexation of Kherson and Zaporizhzhia would represent a “stab in the back”. In May 2014 the two Donbass entities held a referendum in which, according to reports, people voted overwhelmingly in favor of secession from Ukraine. Previously, Russian President Vladimir Putin called for the referendum to be delayed. It took eight years for Moscow to recognize the results of the vote. In 2022, the Donbass republics have become a new reality. Russia now sees Donetsk and Lugansk as independent states, but they are unlikely to join the Russian Federation at least until the end of Moscow’s so-called special military operation in Ukraine.

“Holding a referendum on the entry of the Donbass into the Russian Federation is hardly possible under the current conditions. First of all we need to ensure the security of the republics,” said Putin’s spokesman Dmitry Peskov.

On the other hand, the Kremlin is encouraging the de facto authorities in Kherson and Zaporizhzhia to hold a referendum on joining Russia. On August 8, Yevgeny Balitsky, the Moscow-appointed head of the Zaporizhzhia region’s military-civilian administration has officially ordered a local referendum on the possibility of the province joining the Russian Federation. It remains unclear when exactly the plebiscite could take place, although rumors are flying that it could be on September 11.

The problem for Russia, however, is that around 30 percent of the Zaporizhzhia region – including the city of Zaporizhzhia, a home to about half of the region’s population – is still under Ukraine’s control. More importantly, Ukrainian Armed Forces continue attacking and destroying Russian ammunition depots all over the region, which means that security conditions may not allow Moscow-backed authorities to hold a referendum there.

However, Balitsky recently stressed that “electronic voting may be used as an additional option”. In neighboring Kherson region – that is almost entirely controlled by the Russian forces – the military-civilian administration also reportedly plans to hold a plebiscite, despite Ukrainian attempts to launch a counteroffensive and recapture at least some portions of its southern territories.

In other words, the Kremlin seems to hurry to annex southern Ukraine. But will Russia really make such a move?

It is worth remembering that in May Georgia’s breakaway region of South Ossetia canceled a referendum on joining Russia. In addition, in 2006 voters in Moscow-backed Transnistria – internationally recognized as part of Moldova – approved independence and a possible future integration into the Russian Federation, but to this day the Kremlin has not incorporated the region into Russia.

Moreover, on August 7, Ukrainian President Volodymyr Zelensky said that if Moscow holds referendums on joining Russia in occupied areas of his country, there could be no talks with Ukraine or its international allies. If history is any guide, the Kremlin will take Zelensky’s threat seriously.

On April 17, during the battle for Mariupol, Zelensky said that negotiations with Russian officials would end if the Ukrainians defending the city were killed. As a result, Russia agreed to “evacuate” the Ukrainian fighters to prisons in the self-proclaimed Donetsk People’s Republic. Some of them were exchanged afterwards.

On April 23, Zelensky threatened to withdraw from negotiations with Russia if a referendum in Kherson is held. It remains to be seen if the Kremlin will dare to cross Zelensky’s “red line”. But given that it is Moscow, rather than Kiev, that insists on negotiations, it is entirely possible that Russia will either urge its proxies to postpone a referendum, or will simply hesitate to recognize a plebiscite and incorporate the territories into the Russian Federation.

If, however, the Kremlin eventually gives the two regions’ military-civilian administration the green light to hold a referendum, it risks suffering another humiliation in Ukraine. Unlike in the Donbass and Crimea, where there is a strong pro-Russian sentiment, in Kherson and Zaporizhzhia not many people are willing to become part of the “Russian world”. If Russia allows a “free” plebiscite to take place, the results may not be in its favor. Therefore, in order to prevent a political suicide, the Kremlin will have to blatantly rig the referendum, even though such an action will immediately be exposed and ridiculed by Ukraine and the West.

One thing is for sure: as long as Russia has effective control over southern Ukraine, the Kremlin will continue to integrate the Kherson and Zaporizhzhia regions into the Russian monetary and economic systems.