Will Scotland Secede from the United Kingdom? 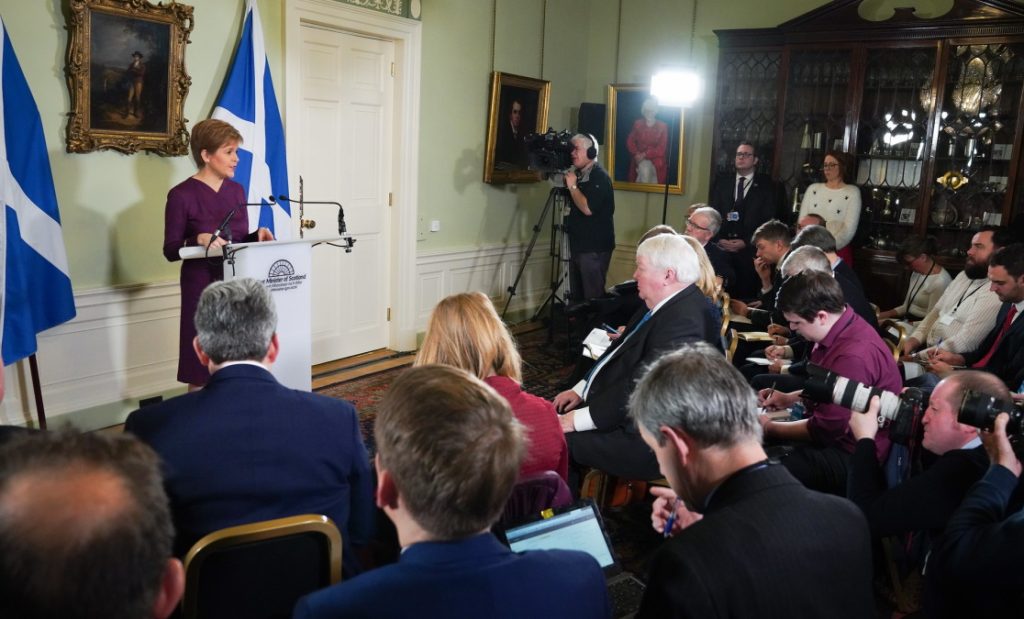 Could Scotland break away from the United Kingdom?

Scottish First Minister Nicola Sturgeon believes so. During an interview on BBC TV on Sunday, Sturgeon indicated that a national independence referendum could be held on October 19, 2023.

On October 7, 2022, the Supreme Court started hearing arguments for allowing a second referendum on Scottish independence. All of this is done without receiving approval from British Prime Minister Liz Truss and the British government.

The question of Scottish independence has been lingering for the past decade or so. In 2014, a plebiscite was held where Scottish voters rejected independence by a margin of 55%-45%.

That said, the Scottish National Party believes that the UK’s successful Brexit campaign in 2016 to break ties with the European Union has opened the door for a renewed push for Scottish independence.

When she was asked during her interview on BBC TV whether she believed that this referendum would take place, Sturgeon replied: “Yes, I am confident that can happen. Let’s wait and see what the court says. I am confident Scotland is going to become independent.”

Sturgeon vowed that the UK government’s defeat in the Supreme Court would result in the SNP challenging the next UK national election, which is set to be held in 2024. The SNP will do so by only campaigning on a platform of whether Scotland should be an independent nation, thereby making this election a de facto referendum.

The Scottish Nationalist Party is leading the charge. Curiously, the SNP supports independence from the UK but wants to have Scotland join the EU. Other movements such as the Scottish Sovereignty party, headed by David McHutchon, want Scotland to not only leave the UK but also stay out of the EU and NATO.

Scotland was a sovereign state from the 9th century until 1707, the year that it entered a political union with England under the Acts of Union that both the English and Scottish parliament respectively passed.

In the age of nationalism, many countries with significant ethnic minorities that have previously been independent or at least have forged strong identities are beginning to assert their political will. The recent populist wave has already called into question the legitimacy of the ruling classes in the West. As the economic and social situation deteriorates in the West, certain segments of these countries’ population will grow more tribal and begin to question the authority of the very nation-states they respectively live in.

If Scotland is able to successfully break away from the UK, it will significantly reduce the UK’’s international prestige. It will be interesting to see how the situation unfolds in Scotland. Brussels may try to exploit tensions between London and Edinburgh. After all, there are still many eurocrats who are still fuming at the UK for leaving the EU.

Dismembering the UK while adding Scotland to its fold, could be the EU’s consolation prize in a post-Brexit world.

Formerly, the empire on which the sun never sets, the UK is facing an existential crisis now that it’s juggling an economic crisis and a separatist threat from Scotland. It’s anyone’s guess who things will pan out in Old Blighty. One thing is certain though: The mighty UK of yesteryear is on its death throes as a world power.

EU Scotland UK
Share. Twitter Telegram LinkedIn Facebook Email
Previous ArticleLe Monde: Dutch far-right leader claims world is governed by ‘evil reptiles’ [on Geopolitics & Empire]
Next Article Ed Curtin: The Most Dangerous Thing is the Insouciance of People as to What is Going On

Bob Moriarty: Covid & Ukraine are the Greatest Propaganda Campaigns of our Lifetime