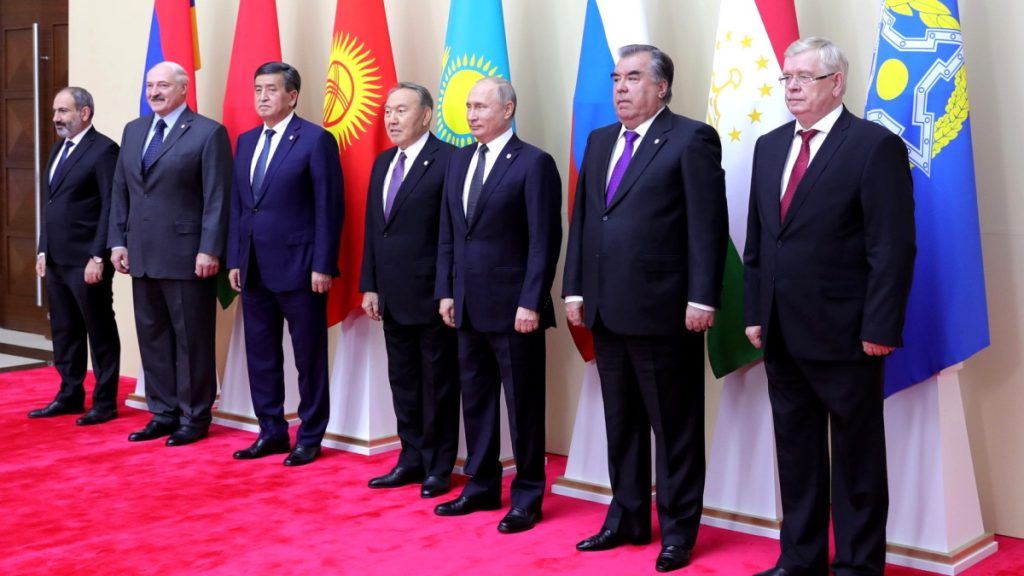 The Russia-dominated Collective Security Treaty Organization (CSTO) remains silent while Ukraine continues shelling Russian territory. The military alliance also turns a blind eye to Azerbaijani actions inside Armenia, another full-fledged CSTO member, while Russian allies Tajikistan and Kyrgyzstan seem to be on the brink of war.

After Russian forces withdrew from the Kharkiv region in Eastern Ukraine, following the Ukrainian counteroffensive, the former Soviet republic’s army reached the Russian border and started bombing critical infrastructure inside Russia. According to Article 4 of the CSTO Treaty, “an act of aggression (an armed attack that threatens security, stability, territorial integrity, and sovereignty) against one of the member states will be considered as a collective act of aggression on all member states of the CSTO”. But the CSTO Treaty seems to be a dead letter.

Armenia is the first CSTO member that became aware of what appears to be a complete uselessness of the Russian-led military bloc. In May 2021, after Azerbaijan reportedly violated the Armenian border advancing 3.5 kilometers (two miles) and surrounding Sev Lake, Yerevan asked CSTO for help, but the organization never acted to protect its member.

According to Armenian officials, during the most recent clashes that erupted on September 12, Azerbaijan’s troops occupied an area of 7.5 kilometers (4.6 miles) deep inside Armenia, along the non-delineated border between the two countries. Yerevan again turned to CSTO for help, but the military bloc refused to intervene.

“The use of military force, more so with the involvement of the Collective Security Treaty Organization, is out of the question”, said Chief of the CSTO Joint Staff Colonel General Anatoly Sidorov.

What is the point of existence of a military organization that does not want to intervene and defend its members? It is not surprising that some Armenian top officials openly criticized the Russian-led bloc, pointing out that “there is no more hope that the CSTO mechanisms will work”.

After refusing to intervene, CSTO expressed its “grave concerns” over the tensions between Armenia and Azerbaijan, and promised to send a mission to Armenia for estimating the situation. Meanwhile, the United States has already sent the Speaker of the House of Representatives Nancy Pelosi to the South Caucasus nation. Such a move represents Washington’s strong political message to Russia. Over the years, it was Moscow that has been acting as a mediator in the conflict between Armenia and Azerbaijan. Now that Russia remains preoccupied with the war in Ukraine, the US aims to increase its influence in the region that has traditionally been in the Russian geopolitical orbit.

Indeed, a truce between Armenia and Azerbaijan was reached after Colin Hackett Kahl, the US Under Secretary of Defense for Policy in the Biden administration, spoke with Azerbaijan’s Minister of Defense Zakir Hasanov. More importantly, this year Azerbaijan’s President Ilham Aliyev and Armenian Prime Minister Nikol Pashinyan have held several summits in Brussels, rather than in Moscow, which suggests that the two countries do not see Russia as a major foreign actor operating in the South Caucasus anymore.

Yerevan, for its part, is reportedly attempting to strengthen its ties with Iran, given that Tehran openly stressed that Armenia’s territorial integrity is the Islamic Republic’s “red line.” But Iran will unlikely welcome growing American influence in Yerevan, which means that the Armenian leadership will have to find a way to balance its cooperation with the Islamic Republic, its nominal alliance with Russia, with the United States’ ambitions to minimize the Russian presence in Armenia.

The Kremlin will, in the long-term, have a hard time preserving the landlocked Caucasus nation in its sphere of influence. At the same time, Moscow will be challenged with growing tensions in Central Asia, where border clashes between Tajikistan and Kyrgyzstan threaten to destabilize the two Russian allies. Although both countries are members of the Collective Security Treaty Organization, Dushanbe and Bishkek continue developing strong military ties with NATO member Turkey. Ankara has already sold Bayraktar drones to Kyrgyzstan and some reports suggest that Dushanbe also purchased Turkish-made unmanned aerial vehicles.

The only way for Russia to preserve both the South Caucasus and Central Asia in its zone of influence is to win the war in Ukraine. Such an outcome, however, does not seem very probable at this point. Therefore, if Russia suffers a defeat in the Eastern European country, its nominal allies will undoubtedly continue distancing themselves from the Kremlin, and seeking to establish close ties with other global and regional actors, from the United States, through the Organization of Turkic States, to China.

Finally, the outcome of the Ukraine conflict will have a huge impact on the very future of the Collective Security Treaty Organization.