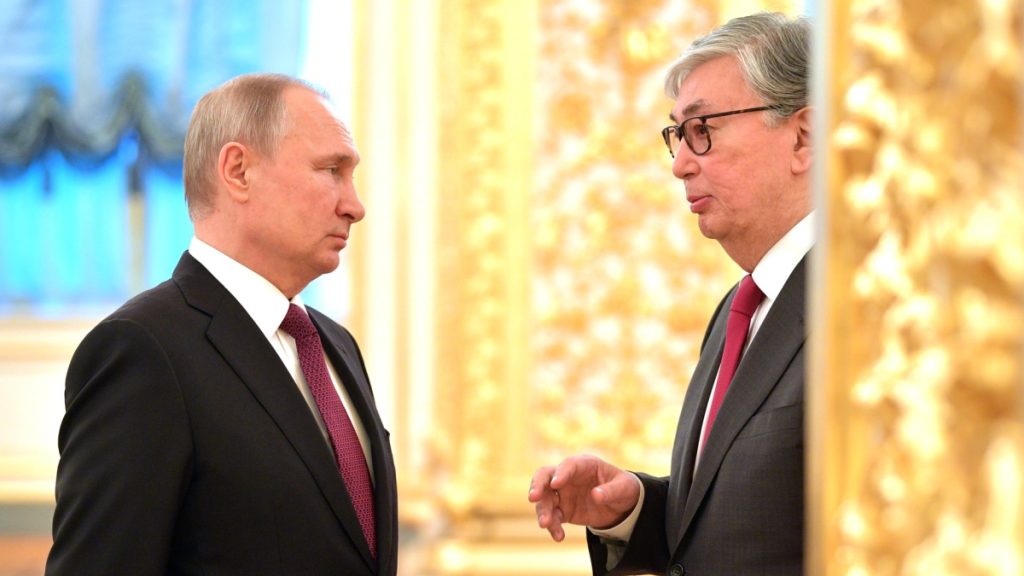 Kazakhstan – Russia’s most important ally in Central Asia – seems to be attempting to distance itself from the Kremlin. Although the energy-rich nation is unlikely to leave Russian-dominated Collective Security Treaty Organization (CSTO) and the Eurasian Economic Union (EAEU) any time soon, Astana is expected to strengthen its decades-old “multi-vector” foreign policy.

Despite reports that Kazakhstan has begun to “slow down” its participation in the EAEU, the Central Asian nation still has very close economic ties with the Russian Federation. It is estimated that more than 13,000 Russian companies operate in Kazakhstan, while at least 80 percent of Kazakh oil exports go through the Russian territory, and then further to Europe. Still, the European Union, rather than Russia, is Kazakhstan’s biggest trade partner, representing almost 30 percent of the former Soviet republic’s foreign trade. Moreover, as a result of the Ukraine war, Kazakhstan’s import from its northern neighbor decreased from 42 to 36 percent, and Kazakh authorities have started freezing joint economic projects with Russia.

More importantly, Astana has begun to use alternative routes – namely railway – for oil supplies to the EU in order to bypass Russian pipelines. Presently, Kazakhstan’s oil exports to the West go primarily through the Caspian Pipeline Consortium (CPC), which is one of the world’s largest pipelines and a major export route for oil from Kazakhstan, via Russia, to the Black Sea. Rail transit of oil is less efficient than shipments by pipeline or by sea, and it cannot represent a sustainable alternative to the CPS. However, Kazakhstan is actively increasing its energy cooperation with Azerbaijan, hoping to use the Baku-Tbilisi-Ceyhan pipeline to sell its oil to Europe. In addition, Astana plans to start actively using the Trans-Caspian International Transport Route to deliver goods via the Caspian Sea to Baku, Azerbaijan, Georgia, and Turkey.

In other words, Kazakhstan’s President Kassym-Jomart Tokayev continues implementing the former Kazakh leader Nursultan Nazarbayev’s “multi-vector” foreign policy by actively developing economic and political relations with Turkey, the European Union, China, the United States and the Arab world. In the long-term, Astana’s integrations into regional initiatives in Central Asia should not be ruled out either. But how will that affect Kazakhstan’s relations with Moscow?

Rumors are flying that Russia could ban a transit of Kazakh oil through its territory. Still, it is rather questionable if there is a political will in the Kremlin to take such a radical step. Even though 3.5 million ethnic Russians live in Kazakhstan, Moscow, currently preoccupied with the Ukraine conflict, can unlikely use them for a potential destabilization of its southern neighbor with whom Russia shares a 7,644-kilometre (4,750 mile) long border. Thus, for the time being, the Kremlin will likely continue turning a blind eye to Astana’s moves, even though Russian influence in the country is significantly declining.

Since 1991, the year Kazakhstan gained independence, the proportion of ethnic Russians in Kazakhstan’s population has fallen from 40 percent to about 16 percent in 2021. According to Murat Kastayev, Kazakh analyst and the CEO at DAMU Capital Management, if such a trend continues over the next 20 years, there will be only one percent of the ethnic Russians left in Kazakhstan. In his view, the transition from Cyrillic to the Latin alphabet, the growing Islamization in Kazakhstan, as well as strengthening of Astana’s cooperation with China and Turkey, will make those countries the main strategic partners of Kazakhstan. Thus, in the long-term, unless it completely changes its foreign policy course, Russia risks losing energy-rich Central Asian nation as an ally.

Although President Tokayev claims that his country “does not intend to leave CSTO and EAEU”, in reality Kazakhstan continues distancing itself from Russia economically, militarily and culturally. The so-called language patrols began in Kazakhstan in August 2021, demanding to be served by people speaking Kazakh language instead of Russian, even though both Kazakh and Russian are official languages in the Central Asian country. In addition, during the bilateral meeting between Tokayev and his Azerbaijani counterpart Ilham Aliyev in August, each leader spoke in his own language, rather than in Russian. It was a symbolic message that both former Soviet republics see their future as part of a Turkic World, rather than as Moscow’s partners.

It is, therefore, not surprising that Kazakhstan seeks to expand military ties with Turkey. In May, Astana and Ankara signed an agreement to start co-producing Turkey’s Anka drones in Kazakhstan. What should worry Russia is the fact that Astana has recently adopted a new military doctrine that stresses guarding and protecting borders, and in particular, “equipping the Border and Aviation Services with modern weapons and military equipment, and technical means of border protection.”

Given that the Russian military industrial complex will have to focus on producing weapons for the Russian Armed Forces, and will unlikely be in a position to increase its exports as long as the Ukraine war goes on, Kazakhstan, despite its CSTO membership, will almost certainly purchase weapons not only from Turkey, but also from countries that Moscow sees as unfriendly.

Therefore, under the current geopolitical circumstances, it will be very difficult for the Kremlin to preserve Kazakhstan in its zone of influence.