Will Belarus Join Russia in Another Suicide Mission? 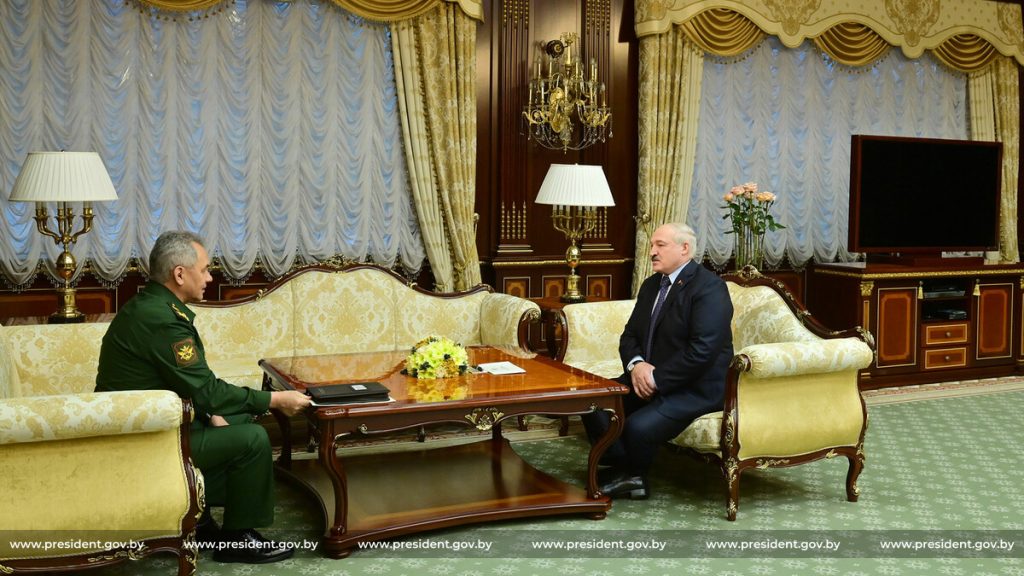 Despite ongoing preparations, Belarusian military is still not ready to actively participate in the Ukraine war. That, however, does not mean that the Kremlin, with or without Belarusian Armed Forces’ help, will not eventually launch another suicide mission, using Belarusian territory to allegedly capture northern Ukraine.

The recent visit of Russian Defense Minister Sergei Shoigu to Belarus has sparked speculation about the possibility of Minsk’s direct involvement in Russia’s so-called “special military operation” (SMO). Shoigu and his Belarusian counterpart Viktor Khrenin signed a protocol on amendments to the 1997 agreement on joint regional military security between Russia and Belarus, although it remains unclear which parts of the deal have been amended.

After Khrenin, Shoigu met with Belarusian President Alexander Lukashenko, who emphasized that the Eastern European country “will do everything it must according to Russo-Belarusian agreement.”

“There are not any divisions: we are a single group of forces, a single army. We are getting ready today. Everybody knows about it. We are not hiding it. In today’s world it is impossible to hide such things”, Lukashenko stressed.

Indeed, various Western-backed open-source intelligence projects in Belarus are actively tracking all movements of Russian and Belarusian forces in the former Soviet republic, which means that Kiev will get necessary information on their plans to invade Ukraine from Belarus. At this point, there are no indications that Moscow and Minsk are preparing to launch a large-scale attack on northern or northwestern Ukraine. But that could change in 2023.

Presently, rumors are flying that the Kremlin expects Minsk to transfer to Russia the Belarusian-Chinese Polonez multiple launch rocket system (MLRS), which is similar in characteristics to the US-made HIMARS. Such a move, however, would apparently require Chinese consent. Under the current geopolitical circumstances, it is rather questionable if Beijing would risk jeopardizing its relations with the West and allow Russia to use Chinese-made artillery systems. Still, Belarus will almost certainly continue providing its own weapons and ammunition to Russia.

Moreover, Belarus is expected to keep preparing for a large-scale war. On December 7, Minsk announced a mass movement of troops and military equipment as part of a counter-terrorism exercise. More importantly, Belarusian preparations for a possible mobilization are in full swing. Such moves, however, could be interpreted as Lukashenko’s bluff, aiming to prevent Ukraine from redeploying its troops from the north to the south and east of the war-torn country.

Although Kiev considers a potential Russian, or Russo-Belarusian joint attack on Ukraine unlikely, the Ukrainian Armed Forces continue strengthening their positions near the Belarusian border. It is not a secret that Ukraine has destroyed almost all bridges and mined the roads along the border with Belarus. Kiev obviously takes Lukashenko’s military maneuvers seriously. Thus, unlike in February when Russian troops did not have a hard time reaching the outskirts of Kiev, this time it would be very difficult for them to make any significant gains in northern Ukraine.

That, however, does not mean that Moscow will not start another military adventure which will result in colossal losses for the Russian army. It is worth remembering that after Russia failed to capture Kiev in March, Shoigu announced that the Russian troops would focus on the Donbass instead.

“The whole secret lies in confusing the enemy, so that he cannot fathom our real intent”, the ancient Chinese military strategist Sun Tzu wrote in his book, The Art of War, almost 2,500 years ago.

But Shoigu and his generals never intended to confuse the Ukrainian military. Instead, they deployed Russian troops right they where they promised – to the Donbass. To this day, they continue using the frontal assault military tactic trying to capture the Donbass towns that have been very well fortified by the Ukrainian Armed Forces. As a result, Russian forces suffer heavy losses on a daily basis, making very little progress on the ground.

Thus, judging by the current Russian military performances, it is entirely possible that Shoigu will eventually use the same suicidal tactics in an attempt to seize certain portions of northern Ukraine. But will Belarus participate in such a mission?

A principle known as “Chekhov’s gun”, named after Russian playwright Anton Chekhov, says that “if in the first act you have hung a pistol on the wall, then in the following one it should be fired”. In other words, if Belarusian army is actively preparing for war, sooner or later it will likely join the fight in Ukraine, one way or another.