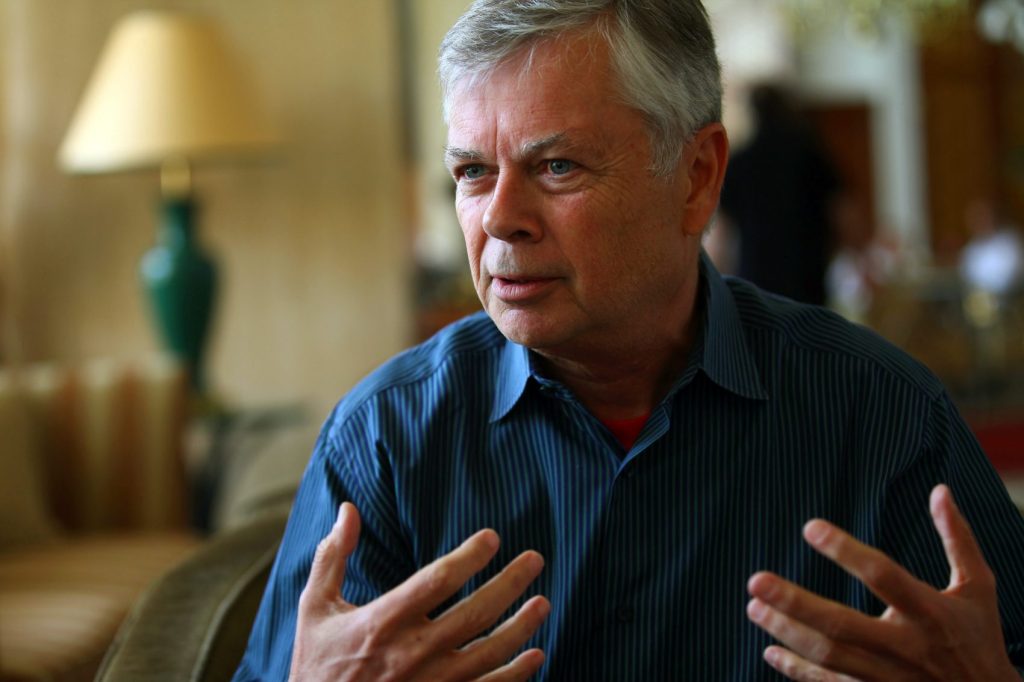 Stephen Kinzer is an award-winning foreign correspondent who has covered more than 50 countries on five continents. His articles and books have led the Washington Post to place him “among the best in popular foreign policy storytelling.”

Kinzer’s most recent book is “The Brothers: John Foster Dulles, Allen Dulles, and Their Secret World War.” The novelist John le Carré called it “a secret history, enriched and calmly retold; a shocking account of the misuse of American corporate, political and media power; a shaming reflection on the moral manners of post imperial Europe; and an essential allegory for our own times.”

Kinzer’s previous book was “Reset: Iran, Turkey, and America’s Future.” “Stephen Kinzer is a journalist of a certain cheeky fearlessness and exquisite timing,” The Huffington Post said in its review. “This book is a bold exercise in reimagining the United States’ big links in the Middle East.”

In 2006 Kinzer published “Overthrow: America’s Century of Regime Change from Hawaii to Iraq.” It recounts the 14 times the United States has overthrown foreign governments. Kinzer seeks to explain why these interventions were carried out and what their long-term effects have been. He is also the author of “All the Shah’s Men: An American Coup and the Roots of Middle East Terror.” It tells how the CIA overthrew Iran’s nationalist government in 1953.

Kinzer spent more than 20 years working for the New York Times, most of it as a foreign correspondent. His foreign postings placed him at the center of historic events and, at times, in the line of fire. While covering world events, he has been shot at, jailed, beaten by police, tear-gassed and bombed from the air.

From 1983 to 1989, Kinzer was the Times bureau chief in Nicaragua. In that post he covered war and upheaval in Central America. He also wrote two books about the region. One of them, co-authored with Stephen Schlesinger, is “Bitter Fruit: The Untold Story of the American Coup in Guatemala.” The other one, “Blood of Brothers: Life and War in Nicaragua,” is a social and political portrait that The New Yorker called “impressive for the refinement of its writing and also the breadth of its subject matter.” In 1988 Columbia University awarded Kinzer its Maria Moors Cabot prize for outstanding coverage of Latin America.

From 1990 to 1996 Kinzer was posted in Germany. From his post as chief of the New York Times bureau in Berlin, he covered the emergence of post-Communist Europe, including wars in the former Yugoslavia.

In 1996 Kinzer was named chief of the newly opened New York Times bureau in Istanbul, Turkey. He spent four years there, traveling widely in Turkey and in the new nations of Central Asia and the Caucasus. After completing this assignment, Kinzer published “Crescent and Star: Turkey Between Two Worlds.”

He has also worked in Africa, and written “A Thousand Hills: Rwanda’s Rebirth and the Man Who Dreamed It.” Archbishop Desmond Tutu of South Africa called this book “a fascinating account of a near-miracle unfolding before our very eyes.”

Before joining the New York Times, Kinzer was Latin America correspondent for the Boston Globe. He is now a visiting fellow at the Watson Institute for International Studies at Brown University, where he teaches international relations. He contributes to The Guardian and the New York Review of Books, and writes a world affairs column for The Boston Globe.

In 2009, Dominican University in River Forest, Illinois, awarded Kinzer an honorary doctorate. The citation said that “those of us who have had the pleasure of hearing his lectures or talking to him informally will probably never see the world in the same way again.”

The University of Scranton awarded Kinzer an honorary doctorate in 2010. “Where there has been turmoil in the world and history has shifted, Stephen Kinzer has been there,” the citation said. “Neither bullets, bombs nor beating could dull his sharp determination to bring injustice and strife to light.”