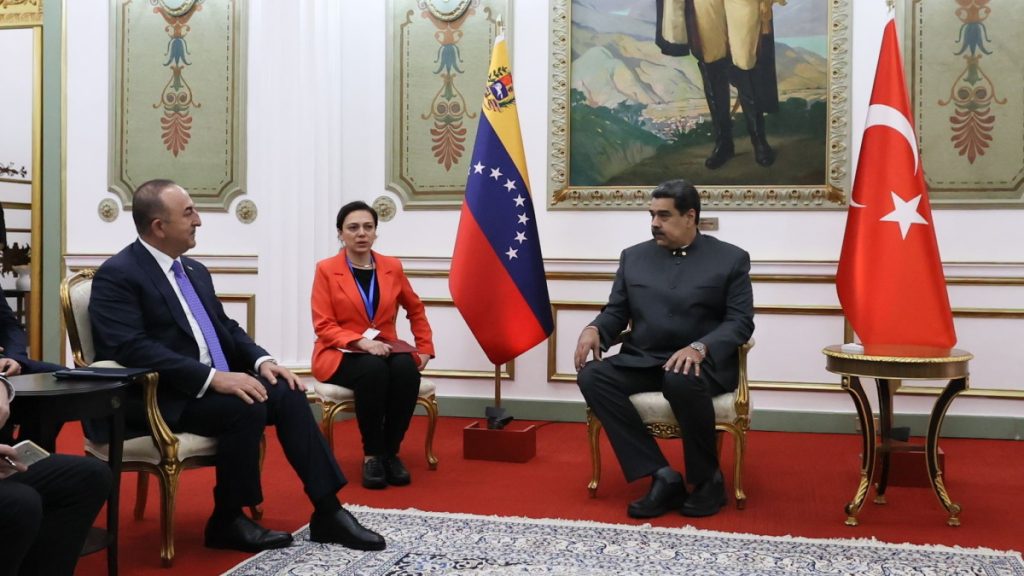 According to a piece at the Venezuelan paper, El Nacional Venezuelan President Nicolás Maduro recently said that now is the right moment for Turkish investment in the Venezuelan economy to increase. On April 28, 2022. Turkish Foreign Minister Mevlut Cavusoglu and several delegates paid a visit to Caracas to meet up with Minister of Petroleum Tareck El Aissami in addition to other figures of Maduro’s cabinet.

During an address on the state-run television station VTV, Maduro called on increased Turkish investment in sectors such as food production, technology, telecommunications, heavy industry, light industry, tourism, oil & gas, and petrochemicals, among others.

“I would like to emphasize once again that we strongly oppose sanctions against Venezuela. We will continue to stand by the friendly country Venezuela,” Cavusoglu stressed.

“We have established very strong political and diplomatic relations based on trust in the recent years between Turkey and Venezuela,” Maduro proclaimed.

The recent statements made by Venezuelan and Turkish officials about bolstering relations between the two countries are not random suggestions.

Over the past decade, Turkey and Venezuela have grown closer. After Hugo Chavez passed away on March 5, 2013, Turkish Deputy Prime Minister Beşir Atalay attended the state funeral of the late Venezuelan leader on March 8, 2013. Atalay’s visit marked a turning point in Turko-Venezuelan relations which have increased since then.

Prior to Venezuela’s constitutional crisis in early 2019, Turkish President Recep Tayyip Erdogan made a visit to Venezuela in December 2018. The timing of Erdogan’s visit was curious to say the least.

According to a Reuters report, in 2018, 23 tons of mined gold were sent from Venezuela to Turkey. Moreover, from January to September 2018, Venezuela’s gold exports to Turkey grew from zero in 2017 to $900 million.

This transfer of gold has led to speculation of a quid pro quid quo transaction between the two governments. In the last few years, Turkey has been plagued with inflation problems and has sought various ways to strengthen its currency, the Lira. Acquiring Venezuelan gold was one way to place a band-aid on Turkey’s inflationary wounds. In response, Erdogan paid Maduro back by diplomatically supporting him during National Assembly leader Juan Guaidó’s attempt to unseat Nicolás Maduro.

Erdogan criticized the uprising attempt in a tweet he posted on April 30, 2019. The Turkish president said:

“Those who are in an effort to appoint a postmodern colonial governor to Venezuela, where the President was appointed by elections and where the people rule, should know that only democratic elections can determine how a country is governed.”

Of all the NATO countries, Turkey took the softest stance during the highly contested Venezuelan presidential elections of 2019.

As Imdat Oner, a former Turkish diplomat, observed that the growing ties between Turkey and Venezuela is largely “based on the two leaders’ [Erdogan and Maduro] mutual dislike of the West and frustration with U.S. sanctions.”

As the geopolitical landscape continues changing, Venezuela and Turkey will draw closer to each other. Liberal democracies’ zealous efforts to effect regime change, use sanctions, and other subversive measures against “illiberal” countries such as Turkey and Venezuela can only go so far. These punitive measures make the formation of competing pacts to the Anglo-American political order look more attractive. If the West does not change its policies in a significant manner, Turkey and Venezuela will likely join institutions that are dominated by Eurasian powers such as Russia and China.

At the end of the day, countries ultimately pact with other countries that uphold their interests and do not labor to undermine them.

Is Belarus’ Direct Involvement in the Ukraine War a Matter of Time?