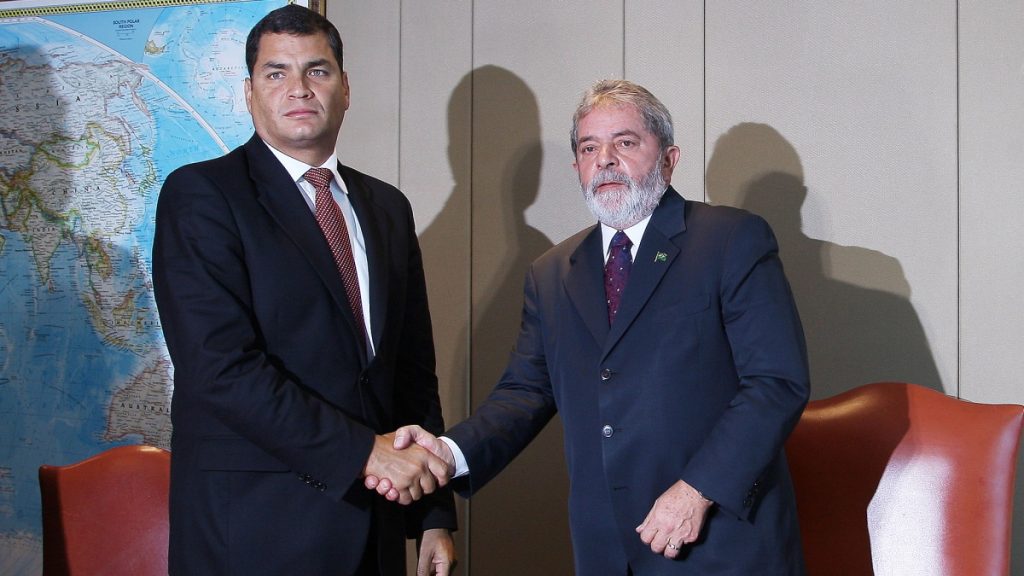 Is the geopolitical environment in Latin America fundamentally transforming?

Former Brazilian President Lula Da Silva’s victory in the Brazilian presidential election has had many geopolitical observers on the edge of their seat. On October 30, 2022, Lula pulled off a razor thin victory against Jair Bolsonaro, where he bested the incumbent president by a vote count of 50.8% to 49.2%.

Former Ecuadorian President Rafael Correa chimed in on this development on November 1. During an interview for the Argentinian media outlet Telam, Correa alluded to Lula’s “integrationist” role and the important role he will play in continental affairs.

“With his victory, the four largest economies in Latin America for the first time in history will be led by leftist governments: Brazil, Mexico, Argentina and Colombia. That totally changes the geopolitical balance in the region. I am almost certain that with Lula CELAC will be strengthened and Unasur will recover. Lula is a great integrationist,” Correa proclaimed.

The governments of Argentina, Colombia, and Mexico are governed by leftists leaders such as Alberto Fernandéz, Gustavo Petro, and Andréz Manuel López Obrador (AMLO) respectively.

Correa believed that South America’s integrity was previously weakened by the so-called “conservative restoration” in Colombia and Peru involving Álvaro Uribe and Alan García, who supposedly undermined the integration process several South American nations were pursuing. In addition, Correa mentioned the parliamentary maneuvers to remove Dilma Rousseff in 2016 and the alleged “coup” against Bolivian President Evo Morales in 2019 as additional moves to weaken South America.

Even in the present, Correa still believes not all South America is on the same page with the left populist agenda that’s present in countries ranging from Mexico to Venezuela. The former Ecuadorian president believes that Chilean President Gabriel Boric has wavered too much on the issue of Venezuela. On one hand, Boric criticizes the United States government’s blockade of Venezuela while also criticizing the Maduro regime — stances that obviously irk Correa. “Boric spends time criticizing Venezuela and also criticizes the US blockade. I find it incredible! Venezuela has 600 sanctions, it is in a war economy and resistance. It cannot be judged by normal parameters, let us have only one morality. These people are surviving a brutal aggression where there have been real invasion plans (…) and there is a left, a Boric who spends time criticizing Venezuela and does not even mention the other”, Correa stressed.

Correa also pushed for a single currency in South America, albeit with several caveats. This currency project was proposed 15 years ago, which Correa believes needs to be resurrected. However, he believes a few nations in the region do not need to be operating under a regional currency. “It is paradoxical because the country that needs it least is Brazil. It is a large conglomerate of countries, half of South America, and it can be strong enough to have a national currency. Those that most need the regional currency are the small and open economies, such as Ecuador or Peru, where capital mobility was disastrous. But in good time if Brazil promotes a Latin American zone with its own currency,” Correa observed.

In addition, Correa stressed the need for a new “regional financial architecture,” that would necessitate the creation of a Central Bank of the South. Under this financial framework, there would be a “Development Bank of the South” to help integrate infrastructure projects.

Overall, Correa’s statements reflect a new reality that’s emerging in Latin America. During his presidency (2007-2017), Correa served as a champion for left populism and frequently aligned himself with the Venezuelan-led Bolivarian axis. For him, Lula’s victory augurs well for a leftist-aligned political bloc in South America.

Correa’s previous comments about the Union of South American Nations (UNASUR) potentially show a change in the direction of Latin American foreign affairs. UNASUR was formally established in 2008. Its initial purpose was to establish a political union on the South American continent. At its peak, UNASUR was made up of 12 South American nations — French Guiana being the only country on the continent that was not a member of the union.

However, that number has fallen to four, with Bolivia, Guyana, Suriname, and Venezuela being the only remaining members.

The rightward shift of several Latin American nations such as Colombia and Peru and Venezuela’s notable drift towards left populism has created a major split in South American political affairs that has undermined the creation of supranational institutions in Latin America.

Since the height of Simón Bolivar’s political career in the 1820s and 1830s, Latin American leaders have tried forging supranational political unions as a way to prevent foreign expansionism and encourage heightened economic and political cooperation between Latin American polities. Such projects have largely failed due to the harsh geography of many Latin American nations which makes it difficult to facilitate trade and mass communication among nations. On top of that, political intrigue within Latin American nations and from external powers such as the US has left the region divided.

However, with the ascendance of Lula da Silva as Brazil’s new president, Latin America now has left-wing control of its most prominent governments in the region. On paper, this makes political integration projects much easier to implement.

Nevertheless, the US will likely try to exploit contradictions within these governments by trying to pry off the more leftist lite, World Economic Forum friendly governments — Chile and Colombia for example. Such geopolitical maneuvering will be of great interest to Latin American observers.

All told, should a leftist bloc consolidate in South America, the US could find itself politically shut out of the region. From there, the new Eurasian axis led by China and Russia will likely pounce on this opportunity to fill in a power vacuum that will undoubtedly make Washington sweat bullets.