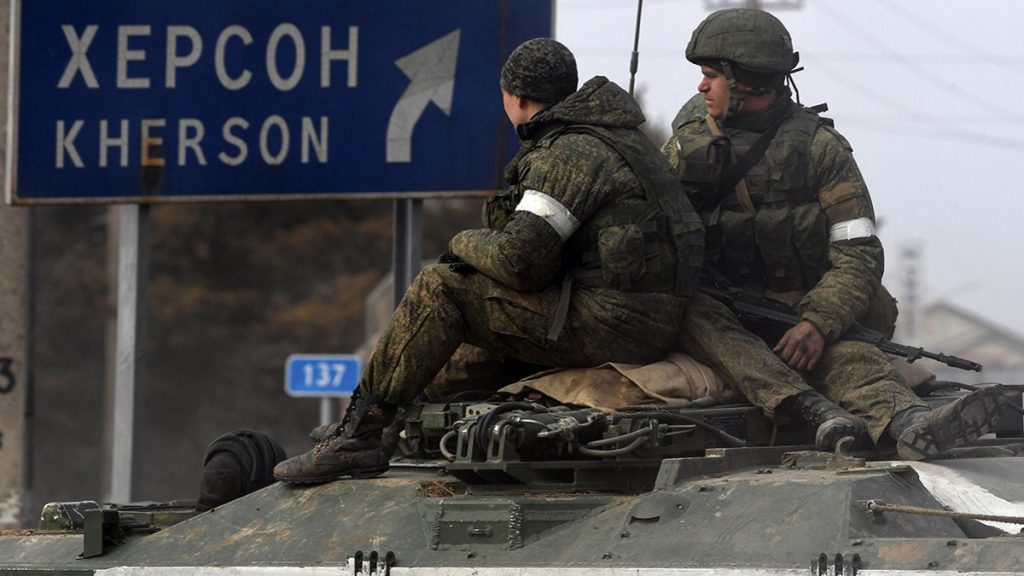 Russia continues suffering defeat and humiliation in Ukraine. Even though the Kremlin declared partial mobilization on September 21, and reportedly deployed a significant number of new troops to the Eastern European country, Russian Armed Forces did not even attempt to defend Kherson – a city that, from the Russian perspective, is an integral part of Russia.

Instead, since mid-October, Moscow has been gradually preparing its population for Russia’s withdrawal from the strategically important city. As a result of Russian retreat, the entire left bank of the Dniepr River, as well as parts of northern Crimea, will now be within the range of the Ukrainian artillery. There is no doubt that the Ukrainian army will mercilessly shell Russian positions in the region, forcing the Russians to retreat all the way to Crimea.

Since the Kremlin made a precedent by abandoning what it sees as Russian territory, there is no guarantee that Moscow will not continue implementing such a “goodwill gesture” policy, allegedly hoping to convince Kiev and the West to start negotiations. But Ukraine has clearly stated that it does not plan to negotiate with the Kremlin until Russian troops completely withdraw from the former Soviet republic, including Crimea. Indeed, under the current circumstances, following Russia’s debacle in Kharkov and Kherson, Kiev has no reason to hold any talks with Moscow.

The Kremlin, on the other hand, desperately wants to negotiate with the Russian enemy. Quite aware that Russia’s military and political positions are much weaker than they were eight months ago, the Western-backed Ukraine continues indirectly demanding Moscow to make new concessions to Kiev. Yurii Vaskov, Ukraine’s Deputy Minister of Infrastructure has recently proposed to Turkey and the United Nations to extend the grain deal for at least a year, and also to include the ports in the Nikolaev region into a new arrangement between Kiev, Ankara, Moscow and the UN. The Kremlin seems to be ready to make another “goodwill gesture” and allow its opponent to freely export its grain, and potentially receive weapons via the Black Sea.

Thus, the Kherson debacle is neither the first nor the last Russian humiliating defeat in Ukraine. Ever since Russia withdrew its troops from around Kiev as part of the Istanbul deal, it became obvious that the Kremlin never seriously intended to achieve any of initials goals of its so-called special military operation. Meanwhile, those goals have become very fluid, just like Russia’s borders. Now Moscow insists that its primary objective in Ukraine is “to protect the Donbass”, even though it clearly demonstrated that it is unable, or unwilling to protect Donetsk from Ukrainian shelling. Therefore, people living in the Donbass, as well as in other Ukrainian regions that Russia recently annexed, cannot be sure that Russia is there “forever”.

That, however, will not prevent pro-Kremlin propagandists, bots and trolls to continue justifying Russian withdrawals – as they have been doing since April when Russia withdrew from Kiev – and portraying them as “brilliant strategic moves” by the corrupt Russian General Sergey Surovikin. In reality, Russia’s withdrawal from Kherson will undoubtedly have a huge impact on the morale of the Russian troops. It remains rather questionable if Surovikin will manage to continue implanting the Kremlin’s “goodwill gesture” policy in such a way that does not lead to the total collapse of the Russian Armed Forces.

It is becoming crystal clear that the Kremlin, unlike Kiev, is not fighting for victory, but that the Russian leadership seeks to find a way to end the Ukraine adventure in such a way that would allow President Vladimir Putin to save face. That is why Surovikin and Defense Minister Sergey Shoigu, rather than Putin, played major roles explaining in front of TV cameras why Russia had to leave Kherson. Policy makers in Russia aim to portray Putin as a “good tsar” who is apparently not aware of what his “bad boyars” are doing.

Although the Kremlin will continue selling such a narrative to the Russian audience for the foreseeable future, sooner or later the level of apathy in the Russian society will reach its peak. Tired of endless defeats, “goodwill gestures” and lucrative deals with Ukraine and the West, certain structures within the Russian elite will likely attempt to force a “palace coup” and remove Putin from power. The West, however, will likely make sure the Russian leader stays in the Kremlin until the end of the war.

Indeed, as long as Putin, his oligarchs and corrupt bureaucratic officials continue pulling the strings in the Kremlin, Russia will have zero chances to win the war.