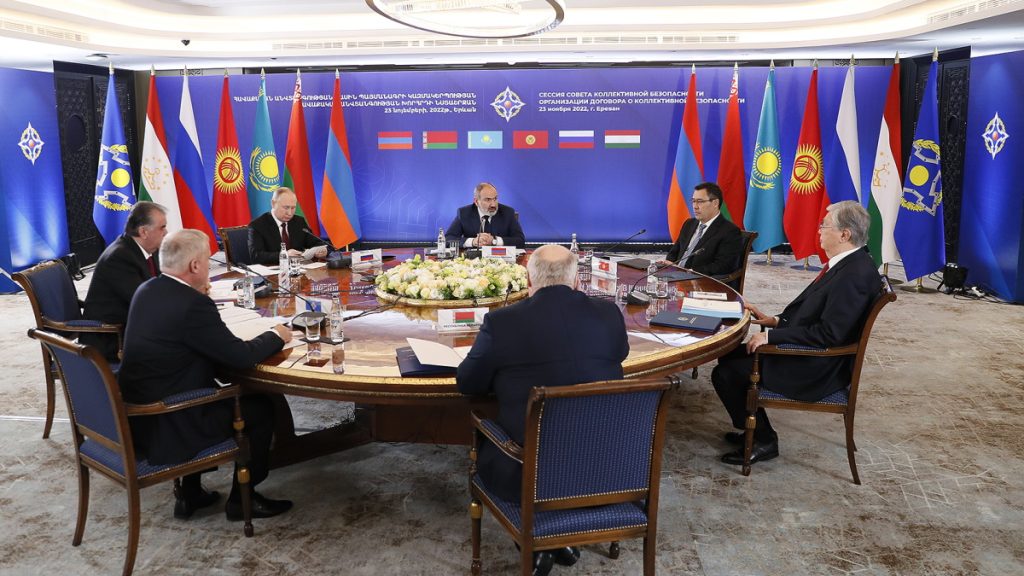 Armenia, Russia’s nominal ally in the Collective Security Treaty Organization (CSTO), has started turning its back on Moscow. Quite aware that it cannot count on the Kremlin’s help against its archenemy Azerbaijan, Yerevan seems to be attempting to distance itself from Russia, and to develop close ties with other regional and global actors in order to improve its positions in the turbulent South Caucasus region.

Prior to the recent CSTO summit in Yerevan, a pro-Western opposition alliance staged a protest calling for Armenia’s exit from the Collective Security Treaty Organization. During the CSTO session, it became quite obvious that Yerevan does not see its future in the Russian-led organization. Armenian Prime Minister Nikol Pashinyan refused to sign a draft declaration of the CSTO Collective Security Council and a draft of joint assistance measures for Armenia because the document did not include a “clear political assessment condemning Azerbaijan’s incursions into Armenian territory in May, November 2021 and September of this year”.

“I will not sign this document in this form, thank you,” said Pashinyan.

Moreover, the Armenian Prime Minister appeared to leave a deliberately large gap between himself and Russian President Vladimir Putin while lining up for a photo.

His moves represent a slap in Putin’s face. The Russian leader is used to being humiliated by his Western partners, but not by Armenia – a small landlocked country of around three million people, heavily dependent on Russia both economically and militarily.

“Did Armenia secede from the Soviet Union legally? No. So it is an illegal state entity. We have to act on this basis”, Fyodorov stressed, pointing out that Pashinyan came to power as a result of the US-sponsored “color revolution” in 2018.

According to Fyodorov’s logic, Russia is not a legal state entity either, since it was late Russian President Boris Yeltsin who dissolved the Soviet Union on 8 December 1991, when he signed the Belovezh Accords together with then leaders of Ukraine and Belarus, Leonid Kravchuk and Stanislav Shushkevich. Thus, it was Russia, rather than Armenia, that illegally seceded from the USSR.

In addition, if Pashinyan is really a product of the US billionaire George Soros, as Fyodorov claims, it remains unclear why Russia did not prevent the 2018 “color revolution” in Yerevan? The Kremlin, in the usual manner, continues blaming everyone else for its own political impotence.

In an attempt to find a common language with Pashinyan, Putin met with the Armenian leader on November 24. But two days later, the Russian President held a phone call with his Azerbaijani counterpart Ilham Aliyev, discussing “practical aspects of unblocking transport links and economic ties in the region”. It is a not a secret that Yerevan firmly opposes the construction of the Nakhchivan Corridor – a route that would connect mainland Azerbaijan with its exclave of Nakhchivan via Armenian territory – since such a land link would deprive Armenia of its sovereignty along the country’s border with Iran. Control over transport links for this corridor would be guaranteed not by Yerevan, but by the Federal Security Service (FSB) of Russia. Thus, Armenia is not particularly interested in the construction of this project.

However, Azerbaijan, as a clear winner of the 44-day war the two nations fought in 2020 over Nagorno-Karabakh region, has significant leverage over Armenia. In an attempt to force Yerevan to build its part of the Nakhchivan Corridor, Baku can either capture portions of Armenian territory, or launch a large-scale military operation in parts of Nagorno-Karabakh that are still controlled by ethnic Armenian forces. Russia has clearly demonstrated on several occasions that it is not willing to openly side with Armenia, which means that in case of an escalation in the South Caucasus, Yerevan will be on its own.

Therefore, it is not surprising that Aliyev recently stressed that Armenia’s sovereignty is symbolic. Indeed, if another conflict breaks out, Armenia has zero chances against Azerbaijan – an energy-rich nation strongly backed by its ally Turkey. Yerevan, quite aware of its position, seems to be attempting to get France involved in the ongoing peace talks with Baku, hoping that Paris, unlike Moscow, will be on Armenian side.

Indeed, sympathy for Armenians in France is more significant than for Azerbaijanis, but the problem for Yerevan is that the Kremlin is more sympathetic to gas and oil pipelines. Russia’s state gas producer and exporter Gazprom announced on November 18 that it had begun supplying gas to Azerbaijan’s state gas company SOCAR, and would supply a total of up to a billion cubic meters through March 2023. As a result, Azerbaijan will be able to increase gas exports to the European Union. Thus, both Moscow and the EU have economic reasons to side with Azerbaijan, which is why it is rather questionable if Armenia can count on France’s serious support.

That is why Armenia aims to increase military and political cooperation with Iran – the only regional actor that has significant geostrategic reasons to prevent the construction of the Nakhchivan Corridor. It is, therefore, not surprising that Yerevan voted against the anti-Iranian UN resolution on establishing an international mission to investigate violations of human rights during protests in the Islamic Republic. However, at this point it remains unclear if the West will give Armenia the green light to develop close ties with Tehran.

One thing is for sure. The landlocked nation will continue distancing itself from Russia, even though it is unlikely to leave CSTO in the near future. The fate of the Russian-dominated organization will depend on the outcome of the Ukraine war.